Every online store should be digitally available to all users. Choosing an efficient e-commerce platform is a strategic choice for high sales. A quick, responsive website encourages customers to browse offers and finally to buy. However, creating the store and adjusting it to requirements of high digital availability, needs a lot of knowledge, time and commitment.

In spinbits.io we want to make this process easier. So read this article, if you want to find out about opportunities and threats that popular e-commerce platforms - Magento and dynamically growing Sylius provide. In September 2021 there are over 250 000 stores that are supported by Magento. It’s about 12% of all online stores. There are about 300 000 developers around the world who can use Magento and almost 9 500 members of the group on Slack.

High popularity also translates into an extensive Marketplace. We can have about 5 000 different extensions, and what’s important - most of them are free. It can really speed up the time of creating and building the store. You have to remember that a large number of extensions cause problems with the compatibility of the additives and ultimately limit the ability to update the system. This is a known issue that Magento has, which may constitute a significant constraint.

This popularity also has some bad points. Magento is vulnerable to so-called "zero-day" attacks. Many accounts are created and easily share unwanted content. It is also a victim of many automatic attacks. Even without real users on a store website, such a platform can generate a system load because of both - robots and competition.

It is worth noticing that Magento offers a range of functions: content and templates management, design customization and advanced SEO functions. Magento is dedicated to all business segments from small to medium-sized enterprises. The support of a large community and a large concern Adobe gives a sense of stability and confidence in this product.

The used XML-based template system is difficult to use. The nested structure is unclearly modified and makes it difficult to predict the final shape of the generated website.

Magento is distributed with a set of unit and functional tests that partially cover the functionality of the store. However, there are no built-in API tests.

Technological limitations, poor code quality, low transparency and unique solutions used only in this platform, all these factors make developers increasingly reluctant to use this platform. This translates to rapidly increasing salaries on the market for Magento developers. On the one hand, Magento increases market share, but on the other hand, it does not create a friendly working environment as a platform for developers.

The community Magento license is freely distributed under an OSL 3.0 license. The commercial version of the Enterprise license costs between 18,000 and 155,000 $, depending on the turnover of the store.

It was built on the basis of the most popular PHP framework - Symfony. It’s a collection of independent components and offers a great opportunity to rebuild and match functionality to individual needs. The latest update version 1.9 introduced support for PHP 8.0 and Symphony 5.3. version.

The small but still growing popularity of the store is mainly caused by very good feedback from developers who value Sylius for quality and its clean design patterns based on good software manufacturing practices.

Happy developers work in a well-optimized and designed environment and have the ability to do their work quickly and flawlessly. Fortunately, Sylius has a comprehensive test environment based on unit tests as well as functional tests using BDD (Behaviour Driven Development).

The growing popularity of Sylius has allowed it to create a community of more than 4000 developers in an open group on Slack. On the other hand, the official Sylius forum does not make the impression of being strongly supported. The repository on GitHub looks even better, with 6 400 stars and around 1 900 forks. We cannot skip the global Symphony community which counts over 600 000 developers and is a natural source of human resources for Sylius-based projects. Symphony developers treat Sylius favourably, like modern technology and they are willing to participate in projects related to it.

Sylius offers around one hundred extensions. It’s not an impressive quantity, but it allows you to look at it as relatively mature, especially if you’d think about small and medium-sized enterprises. You can easily modify these extensions and tailor them to your store’s needs. My experience shows that addons rarely interfere with each other - perhaps because there are not so many addons. :)

Thanks to its architecture, Sylius guarantees a much faster TTM (Time To Market). It allows developers to use their time more efficiently, by focusing on the business needs of the store, rather than on solving problems with bad store architecture.

The free license is available as an open-source code provided under the MIT license. The commercial version is available as a Sylius Plus license with the SLA, extended functionality for larger stores with multi-vendor (multi-vendor, multistore) modules, extensive administrator privileges, and return management.

Magento is known for performance issues. Obviously, different kinds of caches that significantly speed up loading times are used in production solutions. Despite this, we should remember that such infrastructure costs more.

Besides the poor performance of the store (both in the admin panel and on the store user's side), there is another important problem. Store indexes containing cached product data, stock index, and attributes are constantly changed because of the large assortment and dynamic sales. It makes the cache out of date, which causes a heavy load generated by background-based processes that are designed to keep them up to date. In practice, it may lead to selling products that are no longer available.

Yegor Sythikov provided an interesting comparison of the performance of both platforms without complex background processes. 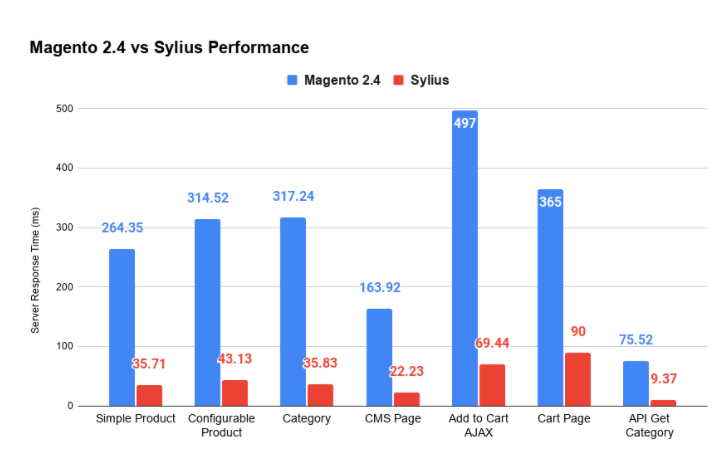 Magento through my eyes

The frequent use of the Magento platform is rather a result of good marketing, but those who finally choose it, have a low-performance platform, only because it is owned and supported by a large company, which gives a sense of business confidence.

Looking at the giants who use Magento for their stores, we’ll see companies such as Coca Cola, Ford, Nike, Jaguar, Puma, H&M. eObuwie.pl is a good example of a polish company, but it has started to withdraw from Magento and seek other solutions. How to choose the best IDE for your projects 6 things that an outsourcing company can bring to your project

What are the steps in implementing IT projects?